The Constitution elm was a popular tree long before Indiana became a state. This tree stood near the banks of Indian Creek in Corydon. Nearby, a spring provided a reliable source of drinking water and a cave with flowing water offered a cool breeze. Native Americans sought refuge from the summer heat beneath this tree with natural air conditioning from the cave and water for drinking. Early white settlers soon discovered the elm and enjoyed the comfort it provided in the summer.

In June 1816, 43 county delegates gathered in Corydon to draft Indiana’s first state constitution. One can easily imagine the heated debate involving free public education, a penal system based on reform, and taking care of the aged and infirm (Madison, 2014) in a cramped log cabin on a hill above the tree. For nine days the delegates met in the cabin before deciding to have their meetings in the shade of the elm tree; those meetings continued for another nine days. Since much of the drafting of the first state constitution took place in the shade of this tree, it was known as the Constitution elm.

The Daughters of the American Revolution and the Constitution Elm

In 1909, the newly organized Corydon chapter of the Daughters of the American Revolution (DAR) petitioned the town to let them take charge of caring for the tree and the city agreed (Griffin (1969). The DAR erected a commemorative plaque in time for Indiana’s centennial in 1916. In the early 1920s, the Constitution elm was showing signs of illness and losing limbs; it was determined that the tree was infected by a fungus later identified as Dutch elm disease. One very large, low-hanging limb extended across High Street and the  opposite sidewalk. Pedestrians had to duck as they walked beneath the limb even after it was propped up to avoid blocking cars and foot traffic. In 1923, a man in a car with a cloth top drove under the limb and tore a hole in his roof. He threatened to sue the DAR for damages to his car. The DAR responded that they would sue him for running into the Constitution elm! The suit was quickly dropped. 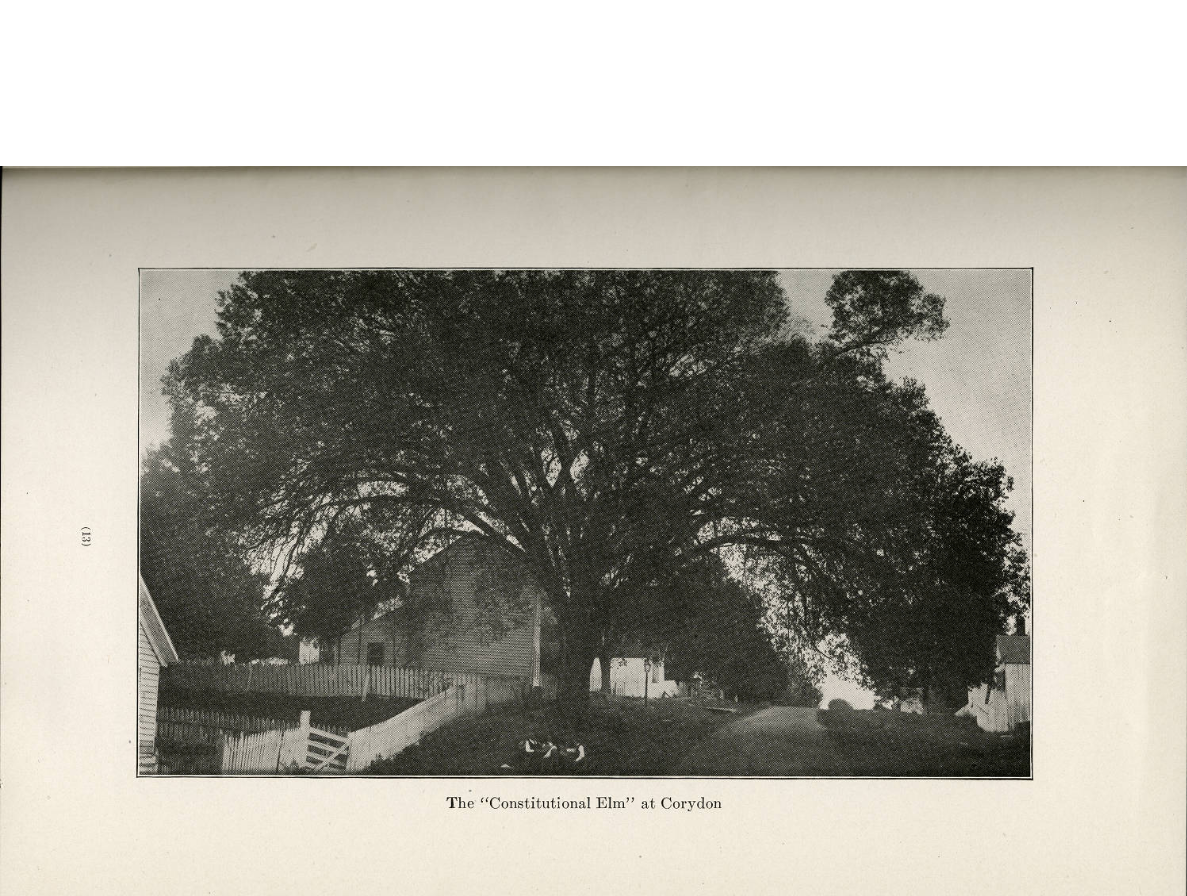 The Death of the Constitution Elm

After the tree died in 1925, the DAR agreed to supervise the cutting of the limbs to avoid further damage (Griffin, 1969). Following several days of work, 34 wagon loads of limbs were hauled to various storage locations for future use. A roof was constructed over the remaining stump, which was then soaked in creosote to preserve it. Two large limbs were cut into cross sections and sent to museums, universities, and libraries across the state. Commemorative gavels were also made and given to dignitaries or sold to organizations throughout the state. About 10 years later, the DAR worked with the state and Works Progress Administration (WPA) to construct a permanent structure to protect the stump. Local sandstone was quarried by the WPA and crafted into the structure still in use today that holds the trunk of the mighty elm and marks the location where Indiana’s first constitution was drafted.

You can read my introduction to historical trees in an earlier post. On many of…