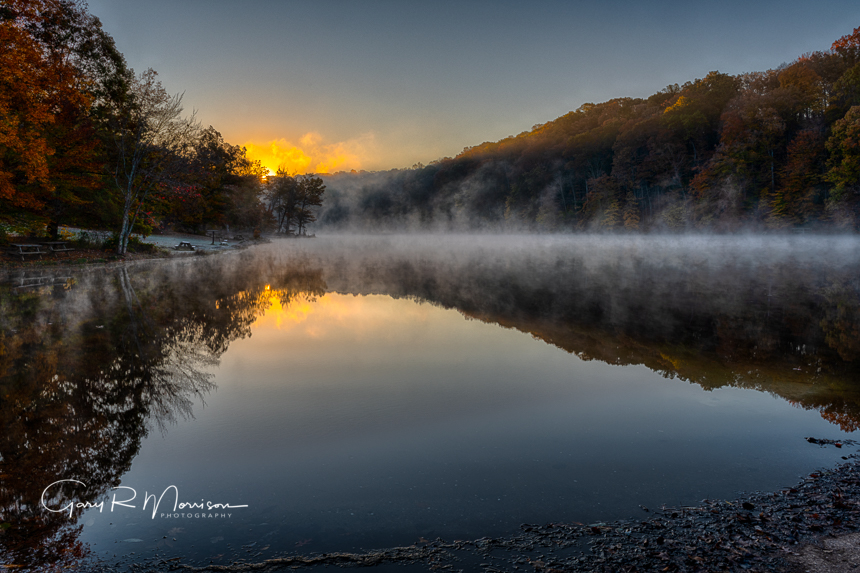 The big question this fall is when will the tree colors peak? Optimist said we would see peak color in southern Indiana by late October. A naturalist friend and I thought late in the first week of November. Now, it looks like maybe the second week of November.

I have made multiple drives through parks and the country side to find little if any color. The leaves are green, brown, or the trees are bare in some places. Plus, we have had too many days of gray sky.

On one of my many trips to Brown County, Indiana, I found some hints of fall color. The image above (Morning fall color at Ogle Lake Brown County SP IN) is an early morning photograph at Ogle Lake in Brown County State Park. The sun rises over the hills a few minutes later than other parts of the park. Typically, I check a few of the overlooks at sunrise before heading to the lake. But this morning, it was my second stop. A few minutes later and the sunlight would have been too harsh.

I was the only one at the lake this morning which allowed me to enjoy the quiet of nature and stillness of the lake. There was a bit of frost on the ground as the lake is in a hollow where it is colder. Again, I jumped from the car and grabbed my gear while forgetting to grab a coat, hat, and gloves. I need to practice my method for setting up before I start photographing birds in 20 degree weather! If anyone asks, yes, landscape and wildlife photography are aerobic activities shivering and pure excitement increase one’s heart rate!

The image below is one I shot a couple of days earlier. There was not much color, but I found a small cluster of trees near the water just after sunrise that were showing some color. There were only a few minutes of good light as once the sun rises over the ridge, it produces a very harsh light.

My wife and were returning from our trip to southeast Virginia a few weeks ago and were very surprised that there were so little color in the mountains of southeast Kentucky, eastern Tennessee, and southwest Virginia. A good friend of mine from Virginia told me that during his trip to Skyline Drive (Shenandoah National Park) a week earlier he had to really search for fall  color. As a result of my observations, I was beginning to believe we would have very little if any fall colors. The  colors are different this year and I will be posting more shots and commentary soon.

Somedays are just made for photography. I had one of those days recently when the…