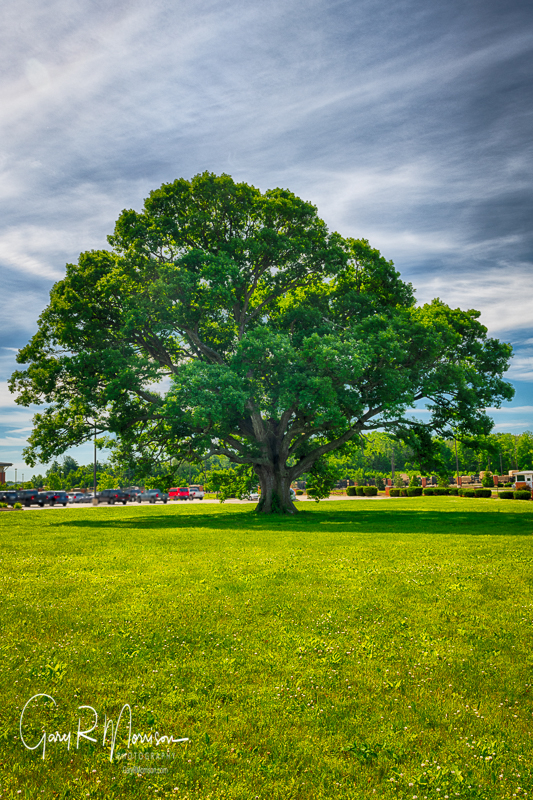 On many of my trips, I have had the opportunity to meet various individuals in cities and forests who have suggested unique trees to photograph. Such was the case when photographing some other trees in Johnson County. An individual recommended that I visit a very old and beautiful white oak at the Franklin Armory. Based on descriptions from a few people, I was expecting a tree beside the road surrounded by concrete with everything from sports cars to tanks in the background. I was wrong.

The National Guard took a specific interest in protecting this magnificent oak and naming it the Tree of Liberty when the armory was built about 10-years ago. They worked with an architect to highlight the tree as focal point at the new armory.  According to personnel at the armory, an arborist believes the Tree of Liberty sprouted in 1713, making it over 300 years old.

The Tree and Slaves

The land around the tree was owned by a Professor Houghman during the Civil War (Schuller, 1934). A cabin sat near the tree while the professor had a two-story brick home built a short distance away in 1857. One morning during the war, Hougham found a family of slaves seeking refuge on his land, as he was known to be a friend to escaped slaves (Schuller). During the war, he kept the slaves seeking freedom in the attic of his carriage house. Soon after the war, he established a family in the log cabin near the Tree of Liberty. He was warned by the Knights of the Golden Circle, a secret society of Southern sympathizers, to “get rid of the family” (p. 2); however, he ignored their threats. Eventually, the Knights burned the cabin to the ground. No one was hurt in the raid and a new cabin was built nearby for the former slaves.

The Tree of Liberty Today

Lieutenant Colonel John E. Pitt of the Indiana National Guard indicated when the armory was built, it was designed with the Tree of Liberty as a focal point. Two-story windows frame the oak tree to make it the center of attention. The tree sits in large grassy area that separates it from the road and parking lot.

After checking with personnel, I received permission to photograph the tree. I did not realize how large it was until I walked around it trying to determine the best location to photograph it. Standing beneath such a tree is truly an experience one does not forget. Despite traffic on the roads and nearby interstate, being in the presence of this beautiful white oak made me forget the world that surrounded us. Moving around the tree, one is impressed by the massive structure of limbs spreading above the trunk. This beautiful tree is worth a visit as it is only short distance from the Interstate. Historic trees such as the Tree of Liberty provide a calming effect in today’s world.

You can read my introduction to historical trees in an earlier post. The Constitution elm…