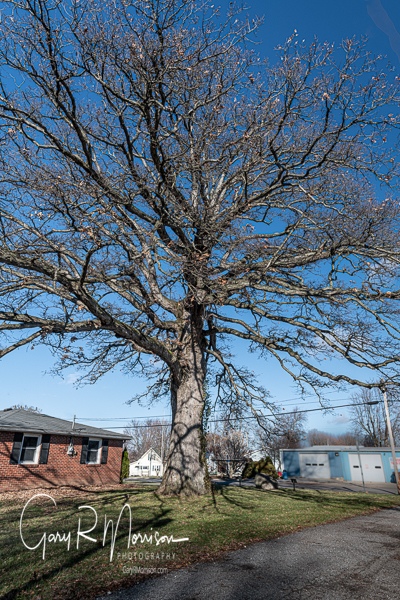 Orestes is a small town of approximately 400 individuals and the home of one of Indiana’s oldest historical trees. The Orestes oak, a magnificent white oak tree, is located across from the city offices and on the grounds of a church. This tree has stood at this site since the 1600s. It was measured in the 1970s by a group from Purdue University who determined it was approximately 350 years old (Watters, 2008). A plaque placed by the Madison County Historical Society in1972 reads, “Since about 1670 this oak has been a landmark for a Delaware Indian Trail for the Fort Wayne Trace. For the village of Orestes and for God.”

Another plaque at the base of the tree that was placed in 1976 to commemorative the U.S. bicentennial by the International Society of Arboriculture and National Arborists Association recognizes the tree as having been alive during the period of the American Revolution.

A Landmark on the Fort Wayne Trace

The Lenape, or Delaware, people originally lived on the East Coast, from present day New Jersey to northern Delaware and ranging west to Pennsylvania (Yann, 2009). By the 1790s, the Lenape had left the East Coast after a bout with smallpox  and losing land to the English and settlers to move to the Ohio River Valley. They then moved to Indiana as a result of the Treaty of Greenville that opened their land to white settlers. In Indiana they established several villages along the White River. The Fort Wayne trace was a trail used by the Lenape to travel from the site of present-day Indianapolis in a northeasterly direction to the fort at Fort Wayne (Jackson, 2009). Traveling from the area of Indianapolis northeastwards, these early Indiana inhabitants would pass through the villages of Nancy Town and Strawtown on their way to Orestes where the Orestes oak was a landmark on the trail to Fort Wayne.

From 1975 until 2003, the city of Orestes held an annual Oak Tree Festival to celebrate the tree (Orestes Comprehensive Plan, 2005). The first festival included “a spelling bee, hog calling, greased pig chase, egg rolling, three-legged sack races, beauty and muscle contests in old-time swimsuits, and beard judging” (Alexandria Monroe Township Historical Society, n.d.). Other events included a cake baking contest, ice cream social, and a worship service under the oak tree. Any clean-shaven man would be fined $2 for not having a beard and serve time in the calaboose. A man could purchase a permit to be clean shaven for $1.50. Sadly, the festival was halted after 2003 when the primary advocate and organizer moved from the area (S. Jackson, personal communication, April 1, 2020). Years ago, the Christian Church was doing work on the church property and it was rumored that they were going to cut down the tree. When word spread to the barber shop where the local tree trimmer was getting a haircut, he immediately started a petition that saved the tree (Watters, 2008).

A Witness to Three Hundred Years of History

Standing for over 300 years, one can only wonder what this tree has witnessed. One stands in awe beneath this tree when you realize it was standing almost 100 years prior to the signing of the Declaration of Independence, and was alive near the time the first French explorers ventured into Indiana (Barnhart & Riker, 1971). The oak tree might have served as a meeting point or a place to spend the night on the long trek by the Lenape to and from Fort Wayne. One might wonder if a mother or father wept in sorrow at this tree after learning of the death of a loved one in battle or from another cause. Or in happier times, maybe a young man proposed to his future wife under the tree or a family enjoyed an ice cream social in the shade during the summer.

Yann, J. L. (2009). In search of the Indiana Lenape: A predictive summary of the archaeological impact of the Lenape living along the white river in Indiana from 1790-1821.  Ball State University, Muncie, IN.

For several years, I have spent much of my time photographing landscapes in Indiana. I…