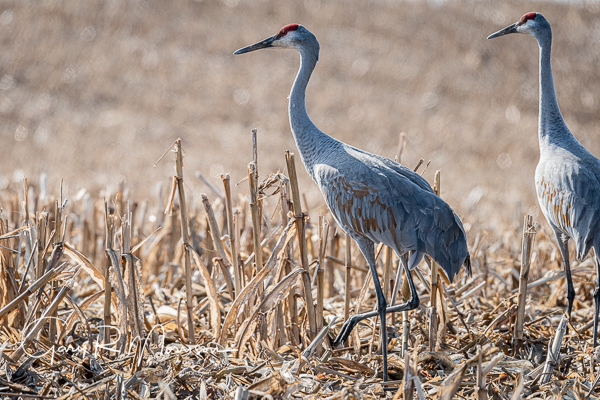 A friend confirmed a few weeks ago that Sandhill Cranes had returned to southern Indiana. My wife said she would like to go see them on my first trip, so we planned a Friday to observe and photograph the cranes. We also took our Irish Setter, Dylan, who was not impressed. However, he is a good traveling dog. He learned early on that if we were not going towards the Vet’s office that he could sleep for an hour or more.

My wife was thrilled as the cranes were very close to the road and she had her first close up look. She could see how large they are and all the details of their beaks, heads, and feathers. After initially spotting the cranes, she volunteered to drive as the road was busy and there were no pull offs. We made a couple of passes and then decided to buy gas and lunch. Dylan was happy as he had a steak and cheese Subway sandwich with nothing but the steak!

On our trip after lunch, we were able to find an area where we could pull off the road and watch a observe of 50 or so cranes that were very close. As we were watching, several hundred cranes flew over making quite a racket. It appeared they were headed towards Muscatatuck National Wild Life Refuge as they did not land within our eyesight. A few minutes later, we saw a small propeller airplane fly over from the same direction and I wondered if it could have spooked the cranes.

We decided to drive to Muscatatuck and see if we could find any cranes, ducks, or otters. We saw a few ducks and possibly two swans at a distance, but I forgot my binoculars and could not identify them. There was not a lot of water in some of the ponds, so I am not sure if the refuge will attract many ducks.

I have studied the Sandhill Cranes’ movement for five years and have a good idea of the fields they will visit next. The area in Jackson County is a winter home to many different breeds of birds including some permanent Bald Eagles. The excursions will provide a nice distraction for the rest of the winter. Of course, if there is snow, I’ll switch back to my landscape lenses and photograph the landscape.

Happy New Year and be safe.

Early Return for the Sandhill Cranes

Sandhill Cranes returned to southern Indiana early this year. Typically, I have not seen them…