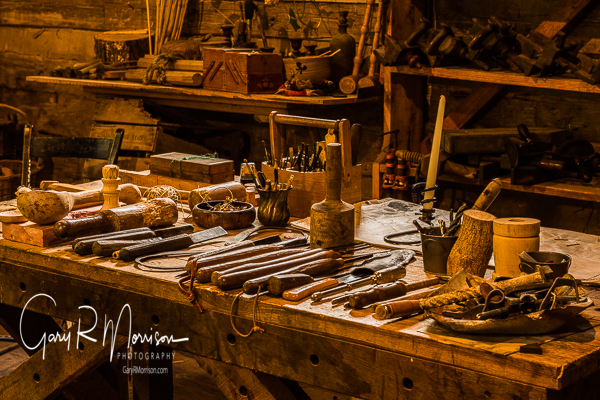 Sometimes, it does one good to leave their comfort zone and try something different. Yesterday, I lead a Photowalk at Spring Mill State Park (my second year doing so). The 1800’s pioneer village provides a unique setting, except I focus on landscape and wildlife photography. I decided to step out of my comfort zone during the walk and try something different. My first stop was the woodwright’s shop where I decided to shoot with available light.

As I was setting up my gear, the resident woodwright-blacksmith-assistant miller appeared. We talked for a minute and then I spotted a can of spray paint on the workbench. I asked him if he could remove it as it was “out of character.” He laughed, turned the label towards me and told me it would make a great Andy Warhol shot! He eventually removed it. He also fixed the barrier so that I could move inside the work area to shoot. However, I was happy with my location for the workbench. I did move inside the barrier to photograph the planes.

As I was processing the image, I started to look more closely at the tools and discovered a few more items were out of character. I did like the Yankee drill as it looked exactly like the one my dad carried on his tool belt when he worked for the telephone company.

Later, a guy named “Doc” struck up a conversation. He was preparing for buck saw demonstration, but told me that since his wife was on one end of the saw, it was a “Buck and Doe” saw. We had a lively conversation as I waited for the woodwright who was morphing to blacksmith to arrive. I never got to photograph the blacksmith shop and my need to return someday to once again step outside my comfort zone.

In Search of Elusive Fall Colors

The big question this fall is when will the tree colors peak? Optimist said we…

Somedays are just made for photography. I had one of those days recently when the…