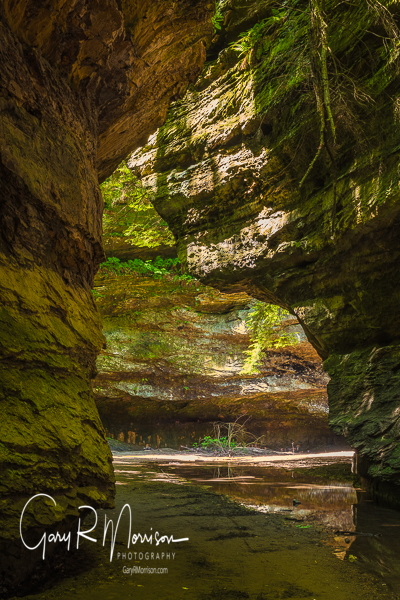 A visit to Turkey Run State Park was on my list since last fall. Finally, I decided to go for a visit this spring. The first two or three times I planned my trip, I found the trails were closed due to heavy rains. We had a dry period in early June and I started my almost two-hour drive. Along the way, I spotted a few other locations to visit on a return trip after September.

The area I wanted to photograph was in the Falls Canyon Nature Preserve. Maybe I am old fashion, but I have always considered a nature preserve as a sacred place. These places should have the same respect as a libraries and places of worship; it is a place of worship for many. The trails are not a place for children to run wild or for high school students to scream at the top of their voices and then deface the trees or canyon walls. At least a large part of the folks visiting the preserve on the day I visited had a different perspective. My first setup was disturbed by a “supervised” group of 15-20 high school students running and yelling as loud as they could. Later, they were searching for rocks to scratch their names in the canyon walls. A few minutes later, I setup my gear on the far side of the trail to photograph the following scene. I am careful and respectful of others and keep my equipment orderly and out of the way at least when others are nearby. I was surprised when a young child jumped of a fallen log and almost landed on my camera bag. I quickly moved it even closer to me. Then, two other children from the same family jumped off the log and almost landed on my tripod and would have knocked if they failed to nail their landing. They were joined by their mother as they continued their walk. I was surprised when another, older couple stopped and told me they had witnessed the event and could not believe the families’ behavior. I gave up as I could not stand the noise, disrespect, and destruction of the preserve.

The park naturalist suggested another area where I could photograph that would have fewer people. There were fewer people and much more respectful, regardless of age!

During my discussion with the park naturalist, I mentioned that Big Oaks National Wildlife Refuge requires every visitor to watch a video (once a year) before entering the preserve due to live ordinance in the area. I suggested that state parks require such training before allowing people to hike the trails. Some areas such as Falls Canyon Nature Preserve are very fragile and need to be protected for others to enjoy. Individuals visiting these preserves need to be informed of the area and respectful.

“I go to nature to be soothed and healed, and to have my senses put in order.”