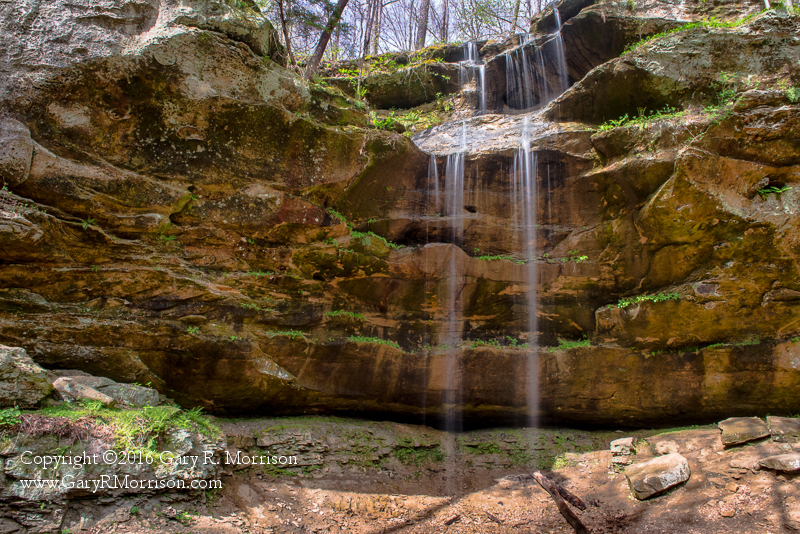 Yesterday, we ventured to Hemlock Cliffs where we hiked down into the box canyon and photographed a water fall. The area has a very wild feel to it as it is isolated and the canyon is quite deep. The trail we took down was steep and had steps cut into the trail. Our exit was a more gradual ascent, but still steep. Either way, when you go down you have to go back up some way! On our trip, it was quiet with only a few other hikers. There were a few wild flowers and the tree leaves had not yet popped.

The area was formed during the Mississippian Period and is referred to as the Tar Springs Formation of the Upper Chester Series. It dates from approximately 320 to 340 million years ago. It was inspiring to walk in such an enclosed area that had that history!

At the bottom of the Tar Springs Formation is a thick layer of sandstone the sits on top of the Glen Dean Limestone. The sandstone varies in strength and friability. After millions of years of water and wind, you can find some interesting sculpting of the rocks in the hollow or canyon. One rock is quite intriguing as it stands guard over a stone house at one end of the canyon. The reddish brown sandstone stands in stark contrast to many of the areas I have visited that have limestone outcrops of various shades of gray.

The last two days of shooting (wood ducks on Monday) have put me on the “injured reserve list.” I irritated my back sitting and waiting for and photographing the wood ducks for three hours. I did not want to move for fear of scaring them and sitting on a 5 gallon bucket is not great for posture. Hiking yesterday further irritated my back and caused some leg problems while trying to compensate for the back pain. Linda had to take me to the walk-in clinic this morning where they gave me a steroid injection and prednisone pills to take for 4 days. The weather is supposed to be bad starting tonight which is kind of good because I am not up for kneeling and crawling around photographing wild flowers!