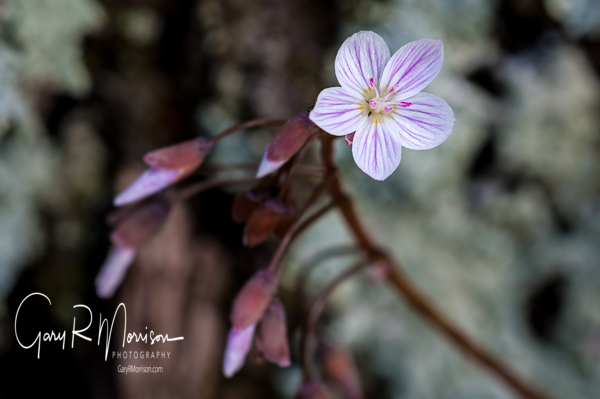 Steven Higgs suggested that Linda and I hike Waldrup Ridge in the Hoosier National Forest in search of wildflowers. I was not having a lot of luck finding wildflowers and after I returned home, Linda would show me the wildflowers in our backyard. Thus, I was eager to find almost any type of wildflower. We got a late start and headed to Waldrup Ridge with minimal directions—parking lot on right and take the fork to the left.

There were two other vehicles in the parking lot, so there was ample space. After putting on our hiking boots (it looked muddy), we started down the trail. About 25 yards into the forest, we were greeted by a large tree that had fallen down and was blocking the trail. This tree was placed such that we could walk under it. An omen for things to come. As we hiked, we found signs of green, but no wildflowers. There were, however, many downed trees that we had to step over, stop on, climb over, or walk around. The hike was quite pretty and you could feel spring in the air. The red buds were in bloom and we noticed a few trees that had fallen but were still producing blooms.

Our first stop was to photograph some ferns that were waiting for warmth to unfurl. We met the first and only other hikers as I was finishing my photos. Back on the trail, we came to what might have been a fork in the trail, but no marking and the path appeared to have little use. We followed the right fork for a short distance. As it started down the ridge, we could see even more of a drop ahead. We decided we had taken the wrong fork as our directions said we would be hiking the ridge.

Is that a fork on the ridge?

We backtracked to the left fork and the going became rough with the number of down trees. Soon, we entered a pine forest that has some future potential for photography. The pine forest opens up to hardwood forest as the ridge moves closer to the lake. We spotted some Spring Beauties and I made a mental note of where to stop and shoot on the way back. Eventually, we came to the old log cabin that is in disrepair. We were greeted by a black vulture that lives in the attic. He kept a watchful or maybe a hopeful eye on us while we were near the cabin. Walking around the cabin, we found a large patch of Virginia Bluebells. In the 10+ years we lived in Virginia, we could not recall seeing any Virginia Bluebells. By the time I finished photographing the bluebells, it was time to head home.

Finding one in many

The hike on Waldrup Ridge was a great hike even with the downed trees. I am planning to return later to capture the area in different light and when the leaves are out.