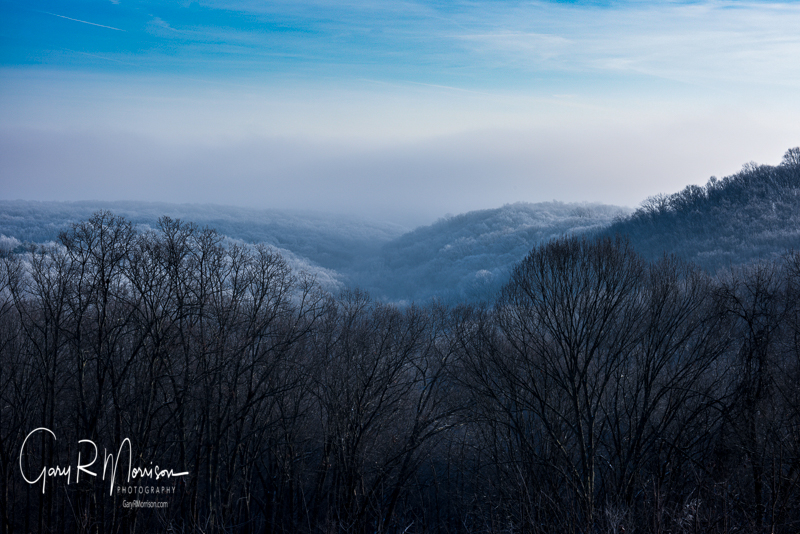 I left home before sunrise with expectations of a colorful sunrise, fog, and temperatures in the 20’s. The sunrise was not colorful; however, there was fog and temperatures in the 20’s – the perfect combination for hoar frost! It was everywhere – on the trees, branches, and last summer’s plants. Mother Nature was busy painting many beautiful scenes. I have seen hoar frost spelled as one word and as two words. Others call it hoaryfrost. It appears that the word hoary comes from Beowulf. Both hoar and hoary mean grayish white and ancient.

The DNR person at the gatehouse told me there was not much color in the sunrise and he had not seen any fog earlier that morning. I drove on hoping to find something to attract my attention. While there might not be much color in the morning’s sunrise, the light often produces a nice scene on the western side of the park. The road to two of my favorite locations was blocked by a gate due to snow from earlier in the week. I turned around and headed back to some other locations. As I was driving on the top of the ridge, I noticed that heavy fog was rolling in from the eastern valleys – it was too thick to photograph from an overlook. The fog on the west side of the road; however, was light. I have noticed this phenomena a few times recently.

I drove on two other overlooks. The first was facing northwest and there was no hoar frost, but the second overlook facing east had hoar frost in the distant valley and hills. The hills look like large puffy clouds! The light created good texture and differentiation between the light and dark sections.

It was a great day for photography!