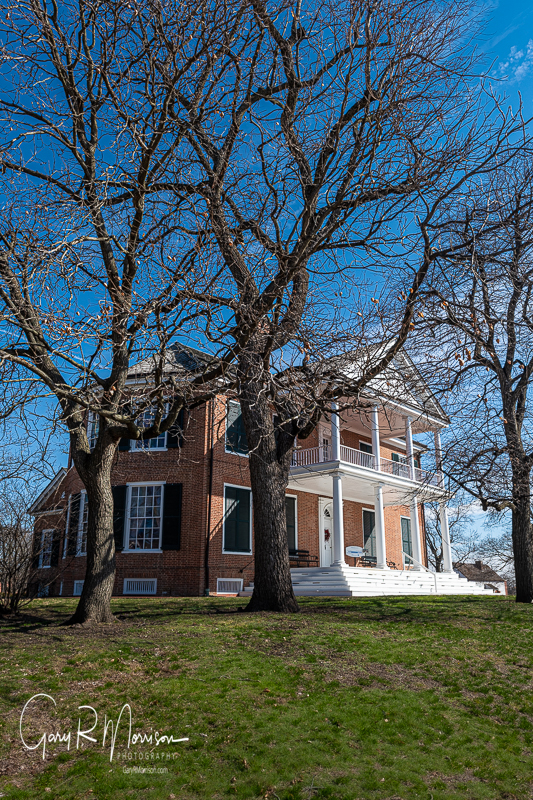 Hoosiers have a love-hate relationship with black walnuts. If you have ever picked up a walnut still within its husk, or epicarp, and tried to get to the nut, you most likely came away with what seemed like permanent black stains on your hands. Similarly, nuts that fall on a deck or sidewalk will also leave a stain. Regardless, the taste of raw black walnuts in a favorite dessert or just by themselves are enjoyable. The Grouseland black walnut tree is a second-generation tree from those in a walnut grove on the land that was owned by William Henry Harrison, the first governor of the Indiana Territory and ninth president of the United States. The tree is located near the house and across the road from the original walnut grove.

The Northwest Territory was formed in 1787 after the Revolutionary War by the Northwest Ordinance and included the future states of Ohio, Indiana, Illinois, Michigan, Wisconsin, and the northeastern part of Minnesota. When Ohio became a state, the Indiana Territory was created by Congress in 1800 and included the remaining land from the Northwest Territory. The territorial capital was established in Vincennes, Indiana, and William Henry Harrison was appointed the first governor of the territory. He started building a home, Grouseland, in 1802 and finished in 1804. While all the original trees in the grove have died, this black walnut tree is a descendant from the original grove that has historical significance.

Tecumseh and the Walnut Grove

According to a letter Governor Harrison wrote to William Eustis the Secretary of War, the Shawnee chief Tecumseh and 80 Indian canoes arrived on the Wabash River on August 12, 1810 (Esarey, 1922; O’Maley, 2014). Tecumseh and his brother the Prophet felt that the chiefs who signed the Treaty of Fort Wayne with Harrison did not have the authority to give land away that was not theirs. Tecumseh journeyed to Grouseland to discuss his grievances with Harrison and inform him that he and his brother planned to put a stop to the white man’s encroachments. When Tecumseh arrived at Grouseland, he found that Harrison had created a portico with chairs on a platform for Harrison’s party and chairs on the ground for the Indians. Tecumseh objected and one of Harrison’s aides indicated it would be too difficult to move the chairs. Tecumseh replied that white men held council in houses and Indians held their councils outside. Eventually, Harrison conceded and the meeting location was moved to the walnut grove with Harrison’s party sitting on chairs and the Indians sitting on the ground (Tucker, 2005). Both Tecumseh and Harrison gave speeches during the multi-day meeting. Harrison’s account of Tecumseh’s speech (through an interpreter) in his letter to the Secretary of War stated, “His speeches the first two days were sufficiently insolent and his pretensions arrogant” (Easery, p. 460).Tecumseh argued that the four tribes signing the treaty did not represent all the tribes and it was illegal. In one of his speeches he said, “Brother. This land that was sold and the goods that was given for it was only done by a few. The treaty was afterwards brought here and the Weas were induced to give their consent because of their small numbers. The treaty at Fort Wayne was made through the threats of Winamac but in future we are prepared to punish those chiefs who may come forward to propose to sell their land. If you continue to purchase of them it will produce war among the different tribes and at last I do not know what will be the consequence to the white people” (p. 466) .The exchanges were heated at times, with both groups taking a threatening stance at one point during the speeches. After several days, no resolution was found and Harrison’s interpreter sensed the potential of violence. Harrison approached Tecumseh and required him to leave immediately and the council fire was extinguished. Harrison later wrote Secretary Eustis indicating his respect of Tecumseh.

The location in the walnut grove changed the dynamics of the meeting. Harrison’s original arrangement had his party elevated and Tecumseh sitting lower at a subservient level. The meeting in the grove placed both parties on an equal level that Tecumseh described as the way Indians held council, that is, all are equal.

Late Spring in the Valley

Earlier this week, we ventured out to photograph the wood ducks again. I was…