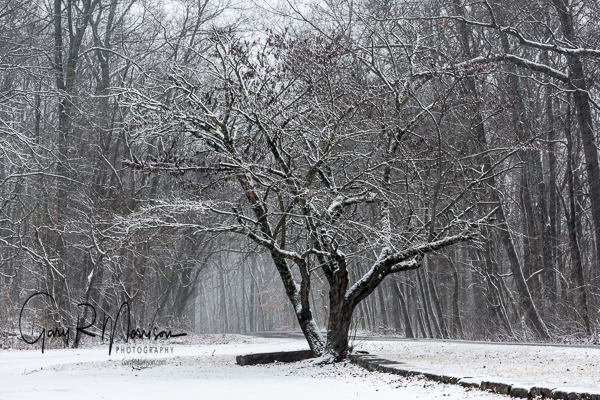 As Linda and I were finishing our errands on Saturday, it started to snow. The snow was wet and it was sticking to the trees. I decided that if I was to going get some snow photographs this winter, I had better head to the woods. The drive to Brown County was slushy, but not slippery. However as I turned into the park, my SUV started to fish tail. The attendant told me the snow caught them by surprise and the roads were slippery. He pointed out an SUV that was off the road and headed into a ravine. The snowfall in the park was at least two inches compared to the half inch at home.

While the falling snow reduced the visibility, it created a serene feeling as only a few cars were traveling the roads. I observed a few people hiking, two individuals were running on the mountain bike trail, and two bikers with very fat tires were making their way down the main road. After my first stop, my hat and jacket were wet. I used a rain coat for my camera, but my lens hood was wet. I had to work out a plan for putting my camera on the tripod, keeping it dry, removing it from the tripod, and drying it. More time was spent setting up and taking down my gear than photographing the scenes!

As the snow fall began to lighten, I had new opportunities to photograph some locations a second time as the lighting and visibility changed. I wish the snow fall had lasted longer as it was fun searching for scenes to photograph as the temperature was hovering around 31 degrees. Hopefully, we will have another snow or two with more opportunities before the trees start to leaf out! It would not be Hoosier Hysteria if it did not snow in late February. I have at least two other locations I have scouted for frozen and snow shots.

Snow in the forest